In this tutorial, we’re going to learn about JSON. We will cover JSON structure, different data types and how to use JSON inside JavaScript.

JSON is one of the most important concepts that you can learn as a programmer or as a QA.

Throughout your programming career you’re going to use JSON all the time whether it’s creating an API, consuming an API, or creating config files for your application.

JSON which stands for JavaScript object notation, is simply a data representation format very similar to XML or YAML.

It’s used widely across the internet for almost every single API that you will access, as well as for config files and things such as games and text editors.

An example of a JSON:

We use JSON because it’s extremely lightweight to send back and forth in http requests and responses due to the small file size.

It’s easy to read compared to something like XML since it’s much cleaner and there’s not as many opening and closing tags to worry about.

JSON also integrates very nicely with JavaScript since JSON is just a subset of JavaScript, which means anything you write in a JSON is valid JavaScript.

Almost every single major language has some form of library or built-in functionality to parse JSON strings into objects or classes in that language.

This makes working with JSON data extremely easy inside of a programming language.

Now that we understand what JSON is and why it’s important, let’s dive into some of the syntax involved and the data types that JSON can represent.

As we know JSON is a data representation format so we need to be able to represent a certain data types within it.

Let’s dive into an example of how to use json inside of a file.

The first thing that you need to do is to create a file with the .json extension at the end of it.

We’re going to create a user.json file with a user object represented as JSON.

To create an object we need to use opening and closing curly braces {} and then inside of that we’ll put all of the key value pairs that make up our object.

Every single property inside the JSON is a key value pair. The key must be surrounded by double "" quotes followed by a colon : and then the value for that key.

In the above example, we have a file called user.json. Inside the file we have different data types.

Note: There is no comma at the end of the last property in the JSON file or a JSON object.

How to Use JSON String Inside JavaScript

Let’s assume we have a JSON file called companies.json which is an array of company objects:

In the above example, we have two company objects inside a JSON array.

Now let’s see how we can use the above JSON inside a JavaScript.

When we inspect the console log in Chrome Developer Tools, the output is similar to what’s shown below: 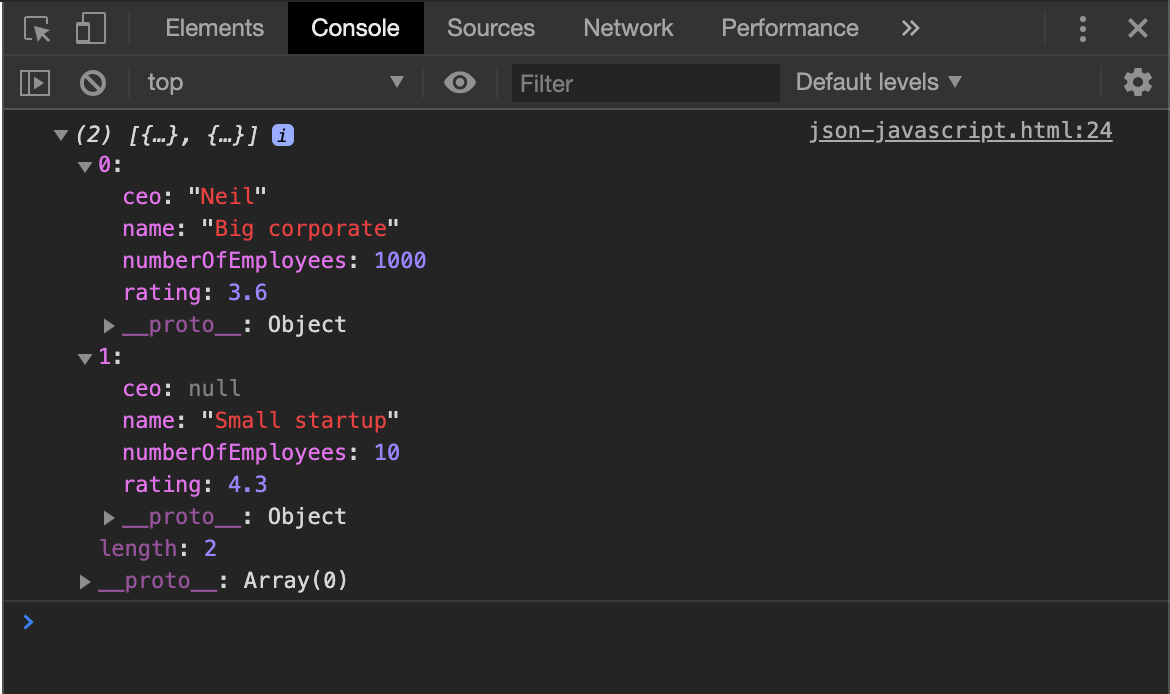 Then we can parse the above JSON by specifying what we want to extract. For example, if we wanted to get the name of the first company in the array we would use:

Likewise, to get the rating of the second company we would use:

How to Convert JavaScript Object to JSON

Now suppose we have a JavaScript object like the one shown below:

To convert the person JavaScript object to JSON we use stringify method:

The output is a valid JSON:

Note: console.log(jsonPerson.name) prints undefined. To get the value, we must convert the JSON back to JavaScript object.

To make the above work, we need to convert the JSON back to JavaScript object.

How to Convert JSON Object to JavaScript

To convert the above JSON object back to JavaScript, we use the parse method:

Note: Now if we tried console.log(jsPerson.name) we get "Brad".

I hope you found this JSON tutorial with Javascript useful. You can now write simple and complex JSON files and interact with JSON strings inside JavaScript.

Java - How to Read JSON File as String

How to Convert Java Object to JSON

How to Parse JSON Response with REST-assured

How to Convert Java Map to JSON

How to Encode and Decode JSON Byte Array