In previous articles, an overarching Agile Test Strategy document as well as how to set up a QA function from scratch for an agile project and how automated testing is one of the key items in the initial setup.

In this Test Automation Strategy example, I list down the key points to consider to get the most out of the test automation endeavor.

Automated Testing is a core activity of any agile development methodology. As we move towards continuous deployment, test automation becomes ever more important due to the quick feedback response that it provides to the development team about the health of the application.

In order to get this quick feedback, automated tests need to be executed continuously, should be fast and test results should be consistent and reliable.

In order to achieve these, the majority of the verifications should be done as part of the development of new features. In other words, development and testing should be a coherent activity, and quality should be “baked in” right from the start by ensuring that what is being developed works and that it hasn’t broken existing functionality.

This requires “inverting the test automation pyramid” by pushing down GUI tests that take a long time to execute, to lower levels e.g. API layer that can run straight after unit tests as part of the build to provide the initial level of confidence.

Prevention rather than detection – while every effort should be spent on preventing the introduction of defects in the application in the first place, the techniques and methods for that are outside of the scope of this post. Here, the methodologies are defined to allow for quick detection of bugs when they are introduced into the system and feedback to development.

Quality should be favored over quantity. In most cases, it is better to release with one feature that is rock solid rather than multiple features that are flaky. As a minimum release criterion, any newly developed feature should not have introduced any regression defects.

As already mentioned, quick feedback on the health of the application is of huge importance to support continuous delivery, therefore, a process and a mechanism by which we can obtain feedback quickly is formulated.

One way of getting quick feedback is by increasing the number of unit tests, integration tests, and API tests. These low-level tests will provide a safety net to ensure the code is working as intended and helps prevent defects escaping in other layers of testing.

The second element of improvement is running the regression tests more frequently and aligned with the process of Continuous Integration, see later. Automation Testing should not be seen as an isolated task, but rather as a coherent activity embedded in the SDLC.

Automated regression tests are the core of the Test Automation Strategy.

Regression packs serve as a sanity check that the application can be loaded and accessed. Also, just a few key scenarios should also be run to make sure application is still functional.

The aim of the smoke test pack is to catch the most obvious issues, such as application not loading, or a common user flow cannot be executed; for this reason, the smoke tests should last no longer than 5 minutes to give quick feedback in case something major is not working.

The smoke test pack runs on every deploy and can be a mixture of API and/or GUI tests.

Functional Regression Packs, which is meant to check the functionality of the application in more detail than the smoke test.

These packs should be able to run in any environment as and when required, provided the behavior of the features remain consistent throughout the environments. They are executed multiple times a day and should last no longer than 15 to 30 minutes.

As these functional tests are more detailed, then they will take longer to run therefore, it is important to have the majority of functional tests at API layer where tests can be executed faster so we could be within the 15 to 30 minutes time limit.

End-to-End Regression Pack, which tests the whole application as a whole. The aim of these tests is to ensure that various parts of the application which connect to various databases and third-party applications work properly.

The End-to-End tests are not meant to test all of the functionalities as those are already tested in the functional regression packs, however, these tests are “light-weight” which just check the transitions from one state to another and a handful of the most important scenarios or user journeys.

These tests are mainly executed through the GUI, as they are checking how users would use the system. The time taken to execute these can vary from one application to another but they are usually run once a day or night. 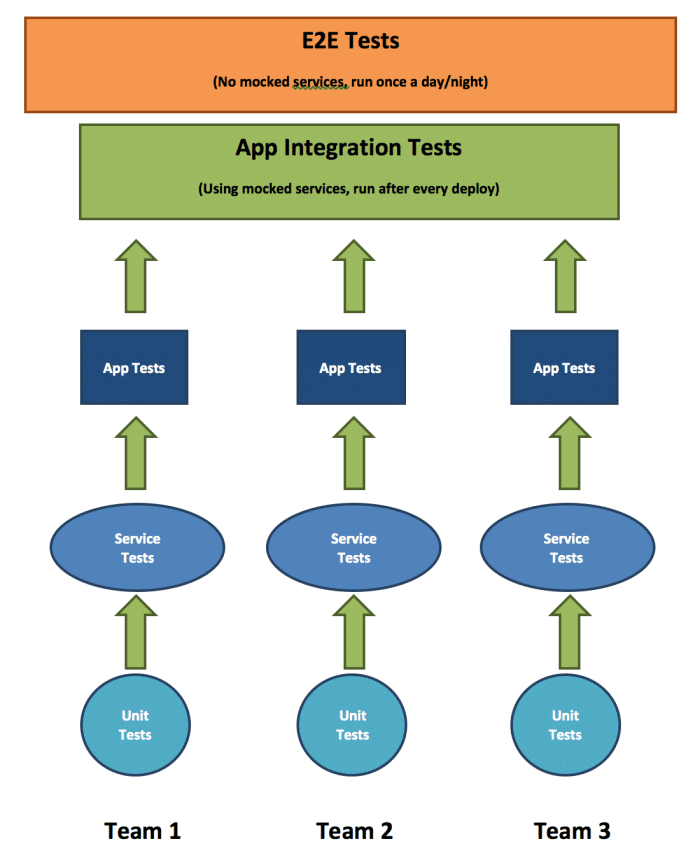 Test Automation starts at the unit level. Unit tests should be written by developers for any new feature that is developed. These Unit Tests form the foundation of a larger automation practice that spans all the way up to the System GUI Tests.

It is the responsibility of the developers to ensure that for every new feature that is developed, a set of coherent and solid Unit Tests are written to prove that the code works as intended and meets the requirements.

Unit Tests provide the most ROI to the team as they are very quick to run, easy to maintain and modify (as there are no dependencies) and when there are errors in code, it is quickly fed back to the developer.

Unit tests are run on the developer’s machine as well as the CI environment.

While Unit Tests are based on testing the functions within a class, Integration Tests form the next level up from Unit Tests to test the classes that collectively make up the component to deliver a piece of functionality. These tests are executed only when the Unit Tests have run and passed.

Service Tests are naturally run at API layer without the intervention of the GUI web interface; hence tests would be able to verify functionality in a pure form and because the tests talk directly to the components, they are fast to execute and will be part of the build.

Where necessary, mocks such as wiremock will be used to factor out the dependence of other 3rd party systems and when the downstream systems are not available to provide the data required for testing.

Integration Tests and/or Service Tests can be run on the developer’s machine as well and be part of the build, but if they start to take a long time, then it is best to run on the CI environment.

Tools such as SoapUI can be used for Service Tests.

A typical e-commerce application can be split into different applications or “apps” that provide different functionalities. The concept of “App Testing” is where a group of tests that test the functionality of an App are organized together and run against the desired App. This pack will be useful in cases when a team wishes to release an individual App and would like to know whether it is functioning correctly.

Application Tests typically require an interface to interact with the different components, therefore it is anticipated that these tests are run via a browser on the GUI.

The purpose of App Testing is to ensure that features of the application are functionally correct. Because the tests are organized in a manner to provide confidence in the health of a particular app, these tests are normally referred to as Vertical Tests, since they execute “down” a particular app. The tests are very thorough and coverage is large.

Selenium WebDriver could be used to run these automated tests against the browser. This tool is the most popular for browser automation tests and provides a rich API to allow for complex verifications.

The GUI automated tests which are run against the system, serve as typical user flows, journeys or end-to-end scenarios. Due to issues with this type of tests (discussed below), these will be kept to a minimum. The end-to-end scenarios are included in the nightly regression pack.

As part of the Test Automation Strategy, we need to ensure to minimize the number of automated tests that are run at GUI layer.

Whilst running automated tests through the GUI provides good and meaningful tests in terms of simulating a user’s interaction with the application, it is prone to many issues as listed below:

Because the tests rely on the HTML locators to identify web elements to interact with, as soon as an id is changed the tests fail, therefore they bear a lot of maintainability costs.

The GUI could confine the tester’s ability to fully verify a feature as the GUI may not contain all the details from the web response to allow verification.

Because tests are executed through the GUI, the page load times can substantially increase the overall testing time and as such the feedback to the developers is relatively slow.

Because of the above-mentioned issues, the GUI automated tests provide the least ROI.

The Browser Automation Tests will be kept to a minimum and will be used to simulate a user’s behavior incorporating common user flows and end-to-end scenarios where the system as a whole is exercised.

How to Use WebDriver Javascript Executor to Navigate to a URL

What is the Typical Structure of an Automated Test?